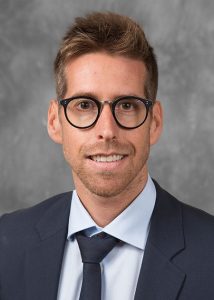 Much has been written about rhegmatogenous retinal detachment and single surgery success rates. The decision of which procedure to choose is most often framed in terms of anatomic success, with less attention paid to how functional outcomes might be affected by this choice. In 2019 Hillier et al. published the PIVOT trial, which was a well designed prospective randomized control trial comparing pneumatic retinopexy to vitrectomy for primary rhegmatogenous retinal detachment repair. One of the most striking findings (other than the high success rate of pneumatic retinopexy performed by this group), was that patients in the pneumatic retinopexy arm achieved better visual acuity and less vertical metamorphopsia at one year compared to those who underwent vitrectomy. This study looked at one possible explanation for this finding – the presence of outer retinal folds (ORFs). The authors set out to determine whether ORFs in the first month following retinal detachment repair were more common in the vitrectomy group compared to the pneumatic group of the PIVOT trial, and whether ORFs impacted visual acuity results at 1 year.

Of 176 participants in the PIVOT trial, 88 were macula-off at presentation. Of these, 83 had gradable OCT images at 1 month post-operative visit (41/44 in PPV group, 42/44 in pneumatic group). Baseline characteristics including baseline visual acuity, lens status, age and gender were not significantly different between groups.

The authors found that 34.1% of patients (14/41) in the vitrectomy group had ORFs at 1 month post-intervention versus 14. 3% of patients (6/42) in the pneumatic group. This finding was statistically significant (OR = 3.11; 95% CI = 1.06 – 9.15). This difference decreased with time as ORFs resolved in both groups. Mean ETDRS letter scores at 1 year post-op were also worse in patients with early ORFs compared to those without (65.7 ± 6.6 letters vs. 75.1 ± 1.4 letters; 95% CI = 7.5-11.3). Interestingly, the authors found no significant difference in vertical or horizontal metamorphopsia scores between groups. They did, however, find that the vertical metamorphopsia score had a moderate negative correlation with distance from the fovea to the nearest ORF (r = -.507, p=0.045). No other ORF characteristic was found to have a statistically significant impact on acuity or metamorphopsia scores.

In order to eliminate the possibility of confounding by treatment group, a subgroup analysis of ETDRS acuity scores in just the vitrectomy group was also performed. This found a similar visual acuity effect. Patients undergoing PPV who had early ORFs were found to have worse acuity than those without (62.8 ± 24.7 vs. 75.4 ± 9.2; 95% CI = 0.05 – 24.59).

The authors hypothesize that procedures which quickly drain fluid from the subretinal space do not allow sufficient time for the outer retinal structures to dehydrate prior to apposition between the retina and RPE cells. They believe this is responsible for the presence of early outer retinal folds which in turn causes worse vision through a variety of mechanisms. This study lends further support to a growing body of literature showing that there may be differences in visual results following retinal detachment repair dependent upon the technique used to repair the detachment. Further study is certainly warranted on this important topic – preferably with larger sample sizes and prospective rather than post-hoc analysis.