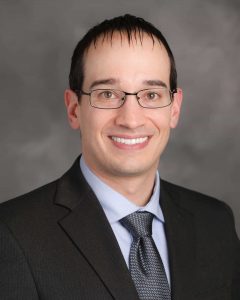 The axiom that the goal of anti-VEGF therapy is to completely dry the retina in cases of neovascular AMD (nvAMD) was recently called into question by the FLUID study.  In this prospective clinical trial, patients with nvAMD undergoing a treat and extend protocol were randomized to either a subretinal fluid (SRF) tolerant group (where patients could be extended if there were < 200 microns of subfoveal SRF), or an SRF-intolerant group (where patients could not be extended if any SRF was present).  Visual acuity gains in the SRF-tolerant group were noninferior to the SRF-intolerant group at 24 months, thus calling into question the necessity of completely drying the retina when treating patients with nvAMD.

More recently, Grechenig et al. completed a post-hoc analysis of the FLUID data to quantitatively investigate the association between residual SRF volumes and treatment outcomes. They used artificial intelligence to automatically calculate SRF volumes in the central 1 mm and central 6 mm of the macula. Their study included only those patients in the SRF tolerant arm of the FLUID study meeting prespecified criteria (n = 98 patients).  They then divided all of the patient visits from these 98 patients into two subgroups: 1) those encounters where patients were extended despite having residual SRF (n = 173 visits) and 2) those encounters where patients were extended and had no SRF (n = 202 visits).   Their main finding was that among patients who were extended despite having residual SRF, increased SRF was associated with decreased best corrected visual acuity (BCVA) at the next visit. This effect was most pronounced when the fluid was in the central 1 mm of the macula (-0.138 letters per nL of SRF, p = 0.014).  Similarly, they found that increasing the treatment interval despite residual SRF was associated with decreased BCVA (-0.250 letter per week interval, p < 0.001). Finally, patients who were extended despite residual SRF showed increased SRF volumes at the next visit in both the central 1 mm and 6 mm of the macula.

The current study seems to suggest that extending the treatment interval in patients with nvAMD who have residual SRF may have detrimental effects on their visual acuity at the next visit. Physiologically speaking, these results are intuitive because a normal, healthy, retina lacks both SRF and intraretinal fluid.  However, the notion that the retina should be treated until it is completely dry has been challenged not just by the FLUID study but also by post-hoc analyses of CATT data showing that the presence of SRF at the foveal center was associated with a better mean BCVA than the absence of SRF.  Explaining these conflicting results will require further study, and the authors acknowledge that studies with longer follow up and more patients will be necessary to truly elucidate the effects of subretinal fluid on treatment outcomes in patients with nvAMD.